The Renaissance is a period of time from the fourteenth to seventeenth century when civilizations on the Italian peninsula and beyond rapidly developed into the prosperous, creative, and enlightened enclaves of people and beautiful examples of human capabilities that we know them to be today. One major aspect of the Renaissance was how new ideas about man’s relationship with the world around them were expressed in visual art by various Italian artists. The question of what it meant to be human came into light to a great extent during this period, and through visual art produced by Italian artists we are able to see the evolution of how the majority of people answered that question. During this time period human beings began feeling a greater sense-of-self, as well as a deeper connection to their bodies and how they interact with the natural world around them. Moreover, the concept of religiosity became much more humanistic and less distant from the mortal, natural world. There were phenomenal breakthroughs about scientific techniques in art that related to the human figure and revolutionized the art world. Not only that, but also reflected in the work was the new cultural values that were being adopted throughout city-states on the Italian peninsula such as a desire to recreate the glorious classical period. Some specific works of art that effectively demonstrate this evolution particularly well through the use of new techniques, color, and human expression are “The Annunciation” by Sandro Botticelli, “The School of Athens” by Rafaello Sanzio. These are only two of the thousands of works produced in the Renaissance period that illustrate the changing perspective on the human condition. 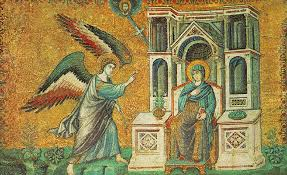 “The Annunciation” by Sandro Botticelli is a depiction of a scene that has been painted countless times by artists belonging to a myriad of different eras, and is one of the most popular subjects of religious Christian art. The scene features the Angel Gabriel announcing Mary’s conception of the son of God. Early examples of paintings which depict the Annunciation, such as that of Pietro Callavini from 1291, lack mathematical techniques needed to construct the angel, the Virgin Mary, and the altar which is also featured, to scale.  The subjects of the painting are seen as if they exist only in a two-dimensional space with no realistic background. Additionally, their facial features are muted and emotionless. The emphasis here is placed more on the religiosity of the subject, and less so about the human emotions being expressed through the subject. There is no vanishing point, nor a central focus of the painting, creating a very still and non-captivating painting in comparison to ones which would be created in later decades. Botticelli’s “The Annunciation,” though representative of the same scene, shows incredible artistic and scientific advancements through the techniques he employed in this work. The background of the painting is drawn to perfect scale, including the trees, the castle, the river, the hills, etc. The technique he used in order to achieve the effect that the nature scene is in the background of the painting is called perspective, or in other words, “a mathematical system for

creating the illusion of space and distance on a flat surface” (PPT Italian Renaissance Art, 2022). Also, within these new styles of paintings that utilized perspective, there is far greater detail in this painting in comparison to the Annunciation painting from 1291 by Pietro Cavalini.

The bodily features and expressions of the Angel Gabriel and the Virgin Mary are much more human-like insofar as the angel has an expression of concern and focus on their face, and is holding their hand up as if they are in the middle of a sentence. The Virgin Mary is shown to be moving away from the angel, evidenced by her extending arms and hollow body position, as he tells her the news of her pregnancy. Susan von Rohr Scaff, author of The Virgin Annunciate in Italian Art of the Late Middle Ages and Renaissance perceived the elegant gesture as being represented in a way that “welcomes the interruption to her reading.” She also discusses that the way in which Mary is bowed, and the positioning of her arm being a mirror of the angels, that Mary is in slight accordance with the news, which is a different and much more nuanced representation that what was typical in the years prior.

That said, her facial expression is somewhat difficult to read; it could be perceived as being calm, perhaps slightly melancholy, but nothing very harsh. Despite that, there is far more detail in this painting than in the one from the previous artistic era. Botticelli placed enormous effort into crafting these figures to tell a story. All of these features about the painting (i.e., the natural scenery, the facial expressions, the movement occurring, and the bright and realistic color scheme) point to the shift in stylistic choices that Renaissance artists were making in order to better represent religion through the natural world. 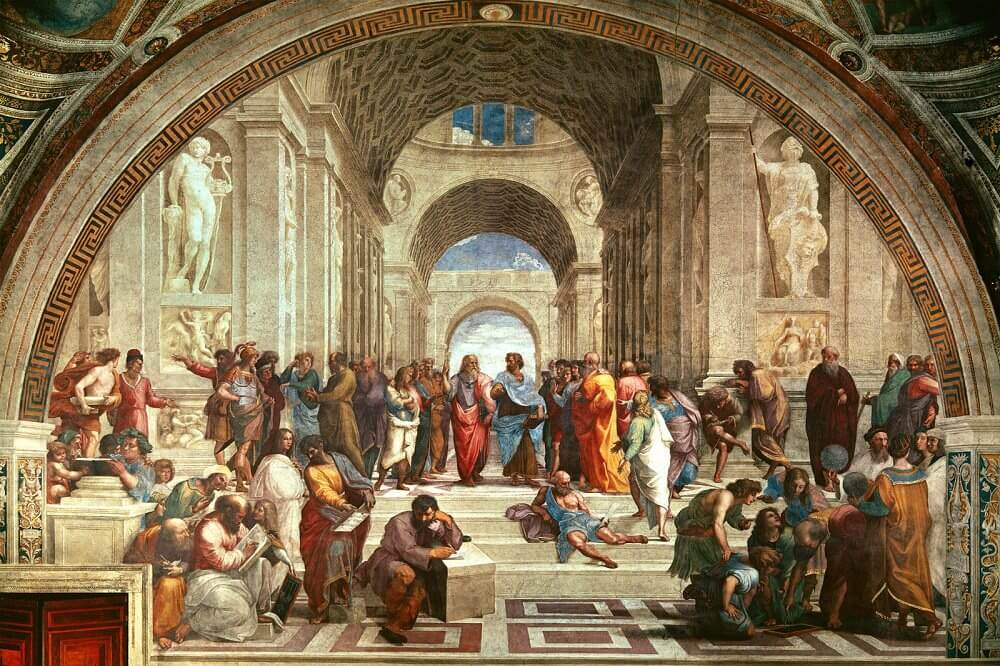 As evidenced by “The Annunciation,” there was a growing emphasis on highlighting humanism through visual art during the Renaissance. Perhaps there is no greater example of a work of art that seeks to glorify the power and intelligence of humans more so than Rafaello Sanzio’s “School of Athens”. “The School of Athens” is a fresco which sits on the walls of the Apostolic Palace in the Vatican City in Rome, Italy. It is a scene in which all the most famous scholars, philosophers, and scientists from the Classical period of Roman and Greek history.

Aristotle and Plato, the greatest examples of Greek philosophers, “occupy the central and highest point” in the painting. The placement of them in the center is indicative of their importance to Rafaello Sanzio, and the people living in the period of the Renaissance in general. Additionally, the entire painting was meticulously mapped out, with each of the philosopher’s disciples being positioned in their respective proximities. Gertrude Garrigues, author of an article which analyzes the painting from a myriad of angles stated that, “It is the epitome of Greek philosophy that it claims our greatest attention” about the work, and credits the positioning of the various disciples according to their mentors as being a reflection of Greek philosophy. Thus, the work not only features and celebrates philosophers from classical antiquity, which is a period highly regarded by people belonging to the Renaissance era, but also, is arranged in such a way that has been inspired by the very philosophies they are seeking to adopt.

Both of these paintings belong to a coveted group of works that all hail from the Italian Renaissance. For a variety of reasons, that period is considered to be a cultural revolution–a period where groups of people throughout the Italian peninsula and beyond became more aware of their capabilities and where they want to place their efforts. The Renaissance, in part, was about taking control over the future by learning as much about the world as possible. This is increasingly relevant today. As of this writing, we are currently living through a sort-of technological Renaissance, insofar as we are seeing new technology unfold at unprecedented rates. With that comes challenges, but also a greater understanding of human potential to solve those challenges with new creative solutions.