Italy has had a complex history from the pre-unification period prior to 1861 through the post unification era after 1861. Italy experienced a renaissance, and a war, all major events in Italian history that not only shifted thoughts but ways of life. Most notably in the Italian consciousness is a shift from racism to xenophobia. Throughout Italian history we can see a shift from racism between the north and south of Italy, to a neo-nationalism that extended to a xenophobic fear of non-italian immigrants. As is true with most of history, this change in the Italian sentiment was not a linear progression with a singular event that can be marked as a catalyst for change. No one moment marks the shift from racism to xenophobia, but rather it was the result of many historical moments, and this paper will examine this trajectory.

The north and the south of Italy have had a history of turmoil in their respective populations. The issues within and between them is one of the many factors that fostered the racism between the north and south.

To begin, the north and south of Italy have had different experiences in their economy and government. This led to prejudices and biases against each other, contributing to the racism Italy faced within its population. The south for example, during the pre-unification era of Italy, was largely based in agriculture. It was an unfair situation where the upper class profited off of the exploited lower class peasants. Agriculture in the south was controlled by those who owned the land.These landowners offered no job security to the peasants that worked on their land and peasants were forced to work with no contracts or protection of their wages. Landowners dictated who could work on their land and when. Peasants were often hired on a daily or weekly basis and if the landowners could find cheaper labor, peasants would be promptly fired. This led to peasants often being underpaid, overworked and fired without any notice. But due to the power imbalance between the landowners and the working peasants, there was nothing the peasants could do. Wealth continued to grow for the landowners but not for the peasant class. The landowners controlled all the land and thus all the money and opportunities. The southern government did not interfere with the landowners and their production because they created a steady economy despite the mistreatment of peasants. The power imbalance ensured that there were always peasants competing and available to work on the land, ensuring production, and that labor costs were consistently low.

The lack of government interference combined with the fact that the vast majority of the southern population were peasants, created a weak sense of government. The people in the south began to distrust the government because it had never benefited them, in terms of legislation or workers rights. This lack of a central government allowed for corruption and greed to fester. The mistreatment of the lower class became a socio-economic norm and the upper class continued to abuse the lower class.

In the north however, the economy was run in a different way. In terms of land and farming the power was a lot more equal between landowners and workers than it was in the south. The north used a system known as sharecropping. In this system rather than the landowner being seen as a tyrannical boss, the landowners took a more hands on approach. They were actively involved in the land’s progress and in overseeing the workers and their conditions. There were annual contracts between the workers and the landowners to ensure job security and a steady income. This helped create a strong entrepreneurial class and allowed the class disparity to be far smaller than it was in the south. The harmony between the working class and landowners on the land fostered a sense of community amongst the north that the south could not create due to its dysfunction. In fact, it is noted that in the north, during periods where labor was scarce, families that lived near each other, or shared land would work together on the land. This idea of benefitting the whole rather than the individual continued to perpetuate the social harmony in the north, and thus a sense of civic trust. The north trusted their citizens and their government to take care of them because the government was not this corrupt entity that allowed them to be exploited as it was in the south.

The difference in the strength between the two governments and further the difference in civic trust, created a disconnect between the perceptions of the north and south. Due to the corruption and the inequality between landowners and peasants created in the south, the north had a negative perception of the south as being corrupted. This was detrimental to the south’s image, as the north, with their wealth and booming literature production controlled Italy’s narrative.

The north’s perception of Italy was that they were selfish, individualistic and amoral and this persisted through unification in 1861. Some portray the unification as this nationalisitc solution that united Italian peoples, but that is inaccurate. The unification caused many southern Italians to migrate north in search of opportunities and the negative perception of them followed. When crime increased, northern Italians blamed that, and many other problems on the southern Italians. It was thought that southern Italians couldn’t ‘play by’ the northern Italians’ rules and had little value for the community that the north had created. This is partially true as the aforementioned weak government in Italy socialized southerners to have more individualistic values, but not the extent that the north suggested. As Alfredo Niceforo explains in Le Due Italie “The peoples with the predominant social sentiment are more conservative, easier to discipline, to educate, to every fact, and that serves to the common interest; instead the peoples with the stronger individual sentiment, are easily rebellious, difficult to be disciplined, and educated.” (Niceforo, 1901, 4). This idea that the south was less intelligent and inferior due to its individualistic nature spread. It served as a way for the north to distance themselves from the amoral south that had seemingly caused all their problems.

However as this continued it expanded into what we now see as racism between the north and south. To differentiate between southern and northern Italians northern ‘scientists’ began to do ‘research’ into their differences and find a cause to the southern Italians’ amoral behavior. This led to the concept of differing races between the northern and southern people. As Niceforo claims in his “scientific findings” “Italy is still divided in these same two zones inhabited by two different races, the Arians to the north until Tuscany (Celtics and Slaves), the Mediterraneans to the south…” (Niceforo, 1901, 2). This was based on the “heavy spheroid skulls” of southerners and the “oval, ellipsoidal skull” of northerners. Niceforo continues to attribute negative traits to mediterraneans, such as being “less civilized” and positive traits to Arians such as being “advanced” and “more intelligent”. This seemingly provides an explanation for the southerns behavior: their race. A correlation between negative attributes and the Mediterranean race of the southern Italians was created and transformed into racism against them. Northern Italy spread this racism through propaganda pieces such as the one shown below. 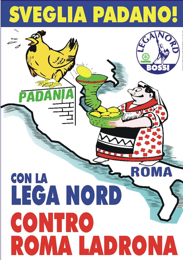 A political party known as The Northern League gained popularity through spreading propaganda such as this. This poster depicts a ‘golden goose’ laying eggs in the north of Italy and the south standing there ready to collect. This represented a general feeling the north of Italy had towards the south. They felt as if the south was stealing their economic benefits and capital, sending it all to their corrupt government. In this case the north was the prized ‘golden goose’ and the south was a leech.This backed by racial tensions the ‘scientific’ community of the north produced, fueled the racial divide between the north and south.

But how did this transition from racism within Italy to xenophobia outside of Italy?  I attribute this change in part to the influx of immigrants coming from outside of Europe to Italy in the 70s and 90s. It is noted that “Italy for the first time registered more people entering the country than leaving…” during this time. (Britannica , 2021). This coupled with the fact that the Northern League was based on prejudices against those who either do not share all the same values or do not look exactly like them, caused a reaction that is to be expected of such a group, xenophobia. The Northern League overtime switched their name to simply; The League. Thus leaving behind their anti-southern Italy racism and embracing a new prejudice against immigrants disguised as ‘nationalism’. This newly reformed League in the 90s now preached unity between the North and South and was using the rise in immigration to unite Italians against some perceived common enemy. As history repeats itself, The League began to attribute problems that Italy as a whole was suffering from, to immigrants. They blamed the increase in crime, economic struggles and much more on immigrants. They went as far to push for limiting immigration and again there was a use of propaganda posters to help sway the general public. 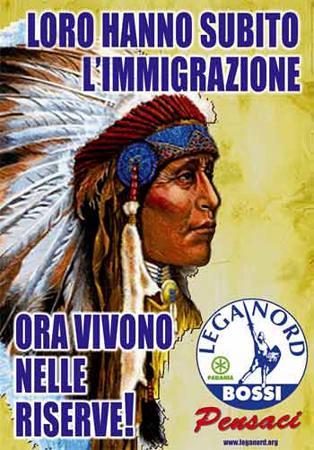 This poster for example published by The League draws an odd comparison between the United States and Italy. It reads “They also were subjected to immigration and now they live on reserves. Think about it” (Harris, 2015). This was produced in 2008, after another influx of migrants fleeing North Africa into Italy. This comparison draws on the turmoil Native Americans faced when colonizers came to their land. It uses the fact that Native Americans had their land stolen from them as a fear tactic to justify The Leagues own fear of immigrants. Obviously this fear is misplaced and the situational contexts are different. However, it does show the lengths The League was and is willing to go to perpetuate xenophobia in Italy. There is a striking similarity between the actions they took against the south, and shows the progression and transformation of their mindset.

Furthermore, xenophobia still exists today, as seen in something as simple as a soccer match. As explained in The Guardian article, 14 year old Ecuadorian- Italian boy Eddie Gallinari faced racial abuse during a soccer game. The crowd of Italians were shouting racial slurs and chants to go back to ‘his country’ despite being born in Italy. (Guiffrida, 2019). Even shown in the image below, Belgian player is seen taunting back ‘I can’t hear you’ to the xenophobic hate screamed at him by Italians during a soccer match. This just proves how this xenophobic sentiment is alive and well in Italy. 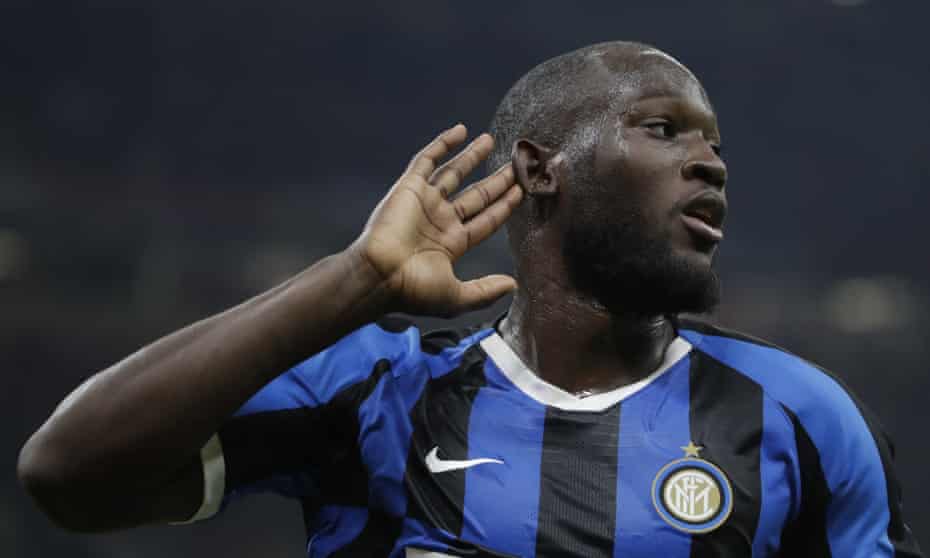 Overall, it is clear that from the beginnings of Italy’s history there has been a divide between the north and south. The north’s strong sense of community caused by a strong government clashed with the south’s individualistic values caused by a weak and exploitative government. This clash later evolved into racism backed by the scientific community of the north after Unification. Later, with an influx of immigrants the fear shifted to outside of Italy, pushing the narrative of nationalism and ‘Italians first’, which we can still see today. This trajectory is long and complex; however, it is fascinating to observe the change in sentiment from before to 1861 to now.

View all posts by ryjomarpaul